The Ultimate Bird: The Herring Gull

The herring gull is a consummate bird, a fact I mention in my book. I lie in bed at night listening to them calling, out on the surf. What is it they eat in the dark? They make so much noise that it is difficult to assess how many there are. In the garden, hearing a mass of cries above, I looked up and counted six; six are enough to wake the dead. A caring neighbour feeds them and they often line up along her roof. I don’t doubt that she sends greetings cards featuring the ultimate bird: the herring gull.

On the terrace at a cafe in Lyme Regis, I heard the cries. About five gulls (never call them seagulls!) sat on roof parapets, staring down at us. They were waiting for food, our food. People shooed them off but they moved no more than a few feet away. It struck me that they had us measured. We were an easier source of food than following fishing boats or rooting in the rocks. The juvenile gull remains in the vicinity of a cafe; it is its major source of food.

Along the front, posh houses, too posh for gulls! The ridge tiles on the new houses had steel pins stabbing the sky, pins to deter gulls. Can you believe it? People move to the Jurassic Coast, find a sea view and build a house that deters the very emblem of the sea. Why would a gull hater move to the seaside? Are they aware that it is the gull poo that feeds the lichen (Xanthoria) that turns seaside roofs a glorious gold.

The ultimate bird: the herring gull

The paddling herring gull is a joy in our area. They usually operate as a pair, standing on grass verges alongside the road. Each gull paddles its webbed feet repeatedly on the grass. This brings worms to the surface, which they then eat. It is thought that the worms believe the drumming to be rain, which brings them to the surface. It might be noisy, raucous and steely eyed, but it is still the ultimate bird: the herring gull. 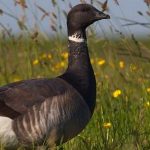 The Brent Geese Have Arrived In Christchurch HarbourBirds 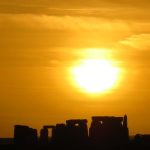