Pensioner Mental Health In The UK

I realise, with the benefit of hindsight, how I gave little thought to my mental health throughout life. Work was my motivation and only now, as a pensioner, do I look back and sense the stress. There were times when Ann and I were doing too much work and feeling the pressure; was I insensitive? We both worked well beyond our hours, mostly on social issues involving birth and death. Improving the environment also mattered and bringing owls back to an owl less world. Without doubt, pensioner mental health was not on my mind, whether of those older people I knew, or myself later in life.

A recent article in the Times was about memory. Hiding in the text were unspoken truths and one was that emotion is the glue in memory. This is why a stillbirth, or a miscarriage, can rest long in the memory. Such events, surrounded by turmoil and anxiety for the future, lock themselves into the hippocampus. But other emotional triggers, like the arts, mountain walks, a long life together, offer a more positive memory. These can sustain us later in life, indeed, perhaps these positive experiences are essential to a good old age. Looking at ones partner and focusing on their value to your life together is also a wonderful image to lock away.

Regret is perhaps the most damaging emotion. I speak to many older people and regret is so often apparent. That wrong house move, that change of job, that stillbirth, spending too much money in early life; these memories speak about what might have been. What is apparent is that the old who radiate inspiration seem not to exhibit regret. When Ann and I spoke to an elderly couple in the cafe at Bournemouth Hospital, the woman explained how they were together, but as widow and widower. It was a partnership of convenience, of support, one the car driver, the other the motivator. She explained how she had had a good marriage, comfortable but routine, until her husbands death. He, she said, pointing to her male companion, is the one I love. There was no hint of regret, only of a future.

The woman had no children. Those of us aging without children see our peer group peel off, one by one. Loneliness could be seen as a threat because that next generation, that avenue into present times, is denied us. The young as a link to the future do not exist. For certain, we will not die surrounded by family. Aware of that, perhaps we make an effort to lock away good memories, enjoyable times, the reflections of that inner eye, as Wordsworth wrote. He also reflected on his love for Dorothy, his sister, and wrote, “No place on earth can ever be a solitude to me.” Are good memories a solution to loneliness or am I kidding myself? If you see me vacantly staring out to sea from the Coffee Cabin at Avon Beach, give me the benefit of the doubt; I will be enjoying the recollections of the past and probably composing a blog post? 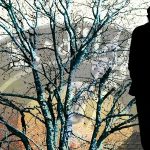 A Death in Friars Cliffpensioners