Why was Stonehenge built? Many experts have put forward reasons, principally related to the seasons and the cycles of the sun and moon. Perhaps less supported have been theories about the stones as a centre for healing or in creating a sound box for drumming or even as a bird perch. The birds would be resting prior to consuming bodies laid out on a sky tower. Other experts have called Stonehenge a place of the dead, based on the burial of cremated remains under the bluestones in the first phase of building. In later phases, when the stones were relocated, no human remains were incorporated.

My expertise is horticulture and in my talks about prehistory I consider the people who built Stonehenge. They are casually called farmers, which they are not. The correct term is horticulturalists, their skills rather more attuned to those who work allotments today. They were hunter gatherers expanding into small scale food production, mostly grain crops. This is because grain can be stored and used over winter, the most difficult period for people living a seasonal life. Consequently, throughout millennia, these are people who would say of a land, that ‘it is well watered with the goodliest woods’. As a result, the water meadows of the River Avon, the area I call Avonlands, became the food factory. Why was Stonehenge built? This can be answered by considering four factors, each contributing to success in prehistory.

People prospered in Avonlands yet they could not understand why. Certainly, the river watered their crops and gave them an essential transportation route. Yet they could not understand the high nutrient value of the water, much of it calcium, and the way the winter inundation nutrified their silt soils. Certainly, they knew the head of the river and the spring lines along its course; how pure, crystal clean water came up from beneath, from the white rock. They did not know how chalk filtered the water but, above all, knew it to be good.

The people had no metal and were restricted to bone, antler and flint tools. There were no beasts of burden or means to plough. As a result, the light silt soils along rivers were the only ones they could cultivate. Imagine the river valleys as market gardens, as a series of allotments, if you prefer. It was not fields and large scale farming. It was small scale market garden production. Why was Stonehenge built? Because the gods gave them silt soil.

You will note that I use the word wood, not timber. Timber means large trees and certainly these are too labour intensive for those early people to routinely cut and move. They did however, use timber, that is tree trunks, from what remained of the wildwood to build wood circles, later replacing these with stone. Certainly, they did not grow timber as we know it. As horticulturalists, they grew wood as a crop, one to be harvested. Wood is small stuff; posts for hut building and wattle for walls. Above all, the real need was wood for horticulture, for fencing to control deer and cattle. These two herbivores could eat crops or young trees, ruining years of work and potentially causing starvation. As a result, they developed coppicing and pollarding skills to produce their wood.

The three preceding factors, water, soil and wood, could be utilised and managed by the people, within reason. Yet theirs was an elemental life, one in which the weather could destroy everything. The seasons mattered and must not be too hot nor too cold, just right, and perhaps the gods could grant them this favour. It is a favour still sought today by every allotment holder, those who lie awake at night, sweating over a frost; these are people who have a supermarket at the end of the road! To all horticulturalists, the sun and moon are fundamental; they must be venerated, honoured as the givers of life.

The Neolithic people in Dorset knew things; they were more advanced than most. Compared to other tribes in other places, they are aware that they prosper, their children survive, crops grow, there is less illness, fractured bones heal. They developed a food surplus and they could even waste food at feasts, to impress other tribes. They owed all this to the gods so built timber circles to pay homage to them. These rotted and they were replaced with stone.

In a previous post I visited Stonehenge in poor weather and recorded this in a post called Is Stonehenge Misinterpreted? Nothing I say here refutes that post. What we might call bad weather is often simply rain. For people growing crops that is a gift from the gods, not something to make them uncomfortable, as with us.

I believe I have answered, why was Stonehenge built? The temple had to be the axis, the point around which their world revolved. It had to be the high ground, dominating the skies, looking east to the rising sun and moon, and west to the setting sun. Even more, it had to look down upon and be linked to the great River Avon. They built a processional avenue, an embanked walkway, linking the two. That also linked to the springs of pure water down by the river. And, if the stones are to replace the timber posts, why not replicate them by using mortice and tenon joints (see the tenon in my photograph)? This venerated wood and timber as well as the longtime skills of the ancestors. The key factors, water, silt soils, wood, the seasons, all unified into one great circle, the circle of life (as they knew it!) 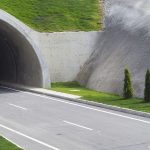 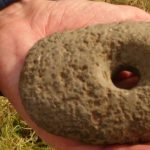