The Loss Of Old England

We walk up Main Street and turn left up Old Smithy Lane. The first cottage has a sign outside, “An old rooster lives here with a young chick”. We climb up past the old smithy and the lane narrows between two drystone walls. It is now single file and shade loving ferns hang from either side. It spills into a green drive, in front of a cottage. It’s archetypal old England, a spot we walk through most days. The steep footpath intersects with a path crossing at a right angle along the green drive (see photo). The cottage is folded into the hillside, a vertical face of limestone behind. Above all, it looks north so all is damp, and it’s up for sale. The loss of Old England frightens me.

The two bedroomed cottage is on sale with the derelict cottage over to its left. I showed a picture of this in a previous post. Between the two is a another low building, all of them built of limestone rubble. The footpath splits all three buildings from a netty building, to the left. A small drystone wall enclosed garden sits on the right, immediately in front of the two bedroomed cottage. Below the netty is a croft, a small field hiding beneath self set trees and wild shrubs. The air of damp dereliction has an touch of romance about it. Places like this are rare and speak of the old days, my old days that is.

The Loss of Old England

In the late 1950’s, as a milkman’s boy, I dropped crates of milk in Hook-a-Gate, a village in Shropshire. The bottles were then delivered to cottages by an elderly woman called Rhoda Tudor. For certain, she had spent her life in the village, was unmarried and lived with her unmarried brother. He drank beer every night at one of the five pubs in the village. Their cottage was similarly damp and had ancient rag rugs all over the floor. The musty odour was iconic and it spoke of people living on next to nothing, with an almost zero carbon footprint. However, Rhoda was a villager to her core. She probably failed to marry due to the male carnage in the Great War.

To conclude, who knows what happens next. Because we walk by, we chat or otherwise see potential buyers. One woman, with her mother, said she would not change anything. However, that was in response to my comment about losing this little vision of the 1950’s. Other buyers are young so perhaps change is inevitable. However, removing the oil lamps from inside the cottage windows is too much. Tarmacking the drive and creating a car turning circle will be a disaster. As Private Frazer would say in Dad’s Army, “were doomed, doomed!” 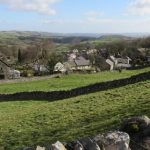 The Death Of The English VillageHousing, Social Life 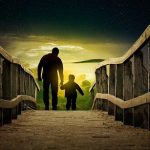