Reviews Of My Pagan Ancestor Zuri

My book was published at the end of July following eight pre-publication reviews. What the reviewers didn’t know were my objectives in writing it. The story was intended to be a social history that also gave Dorset a sense of place in prehistory. This was because I was convinced that visitors to Stonehenge surveyed the stones but gave little thought to the people who built it. I called the tribal area Avonlands and created Zuri. She was my alter ego, to guide us through prehistory. My role, in the present pensioner tribe, was to draw comparisons with life today. I called my tribe of affluent pensioners the gerontocracy, which suggests ‘rule by old people’. Do the reviews of my pagan ancestor Zuri reflect my objectives?

Angela, one of the reviewers gave 5 stars. She said that, “The author’s imagination delivers a picture of the life of Zuri, a female in the farming community during Neolithic times. One of my favorite aspects of this book is that I could read each chapter as an essay. Each allowed me to reflect on the similarities and the differences between Zuri and the current population of gerontocracy. It was a soothing read for me as the portrayals of wildlife, plants, climate and everyday living were woven into a view of life both ancient and modern.” She liked my sense of humour such as the title of Chapter 22, The Advent of Bling, which made her laugh out loud. Finally, she said that she will be buying a copy (she read the ebook) for her personal library; that it was one of her favorite books to read in 2019.

Review of reviews of my pagan ancestor Zuri

A further review stated, “Ken has paid so much attention to his research and detail that it reads like nonfiction. I also like how Ken made comparisons and contrasted Zuri’s life with ours. This took a lot of craft, I think, to pull it off and have a valid point. You really don’t need to have any kind of background knowledge on Ancient Britain or even the Stone Age. Really, it does feel like you are traveling with Zuri and her family.” She also added, “I didn’t know that much about the environment in Dorset before reading this.” She also found it fascinating to consider the differences in our diets and how Zuri had superior eyesight to ours.

Finally, Camille, who gave the book 4 stars said, “I’m not usually overly interested in Prehistory. I thought the book sounded interesting and it was! My Pagan Ancestor Zuri is a bit of a UFO when it comes to books. To me, it’s a bit of a mix between nonfiction, historical speculation, historical fiction and memoir. Ken West manages to successfully intertwine all these genres to create a very unique result. You can tell he knows his subject well. I liked that his speculation was always backed up by evidence. Creating the character of Zuri (the historical fiction aspect) allows you to make (pre)history more real. The memoir aspect of the book draws interesting parallels and comparisons between life then and life now for tribes”. 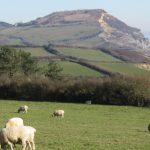 A Saint For Our Global WarmingEnvironment, Social Life