On the morning I was stressed. Can we manage it? Is it too much? Whatever, we were up at 5.45 am, a bowl of porridge, then toast, jam and heather honey (oh, what a substance!) I forgot, I also had a pint of Guinness the night before. Over to Hayfield and park at Bowden Bridge. We jog up the road, carrying water and jelly babies, and above a dry looking Kinder Reservoir. We start up William Clough, from one side of the stream to the other. It’s up and down, muddy then dry, hot in the sun and cool in the shade, with trip hazards everywhere. It’s also steep and long. We break out at the col to see that the final steep climb, onto Kinder plateau, has been pitched. It is at least good underfoot. Oh, the joy of a run over Kinder Downfall.

This aery spot took two years to reach. Back in Dorset I was a dead man walking. A diagnosis of leukaemia (CLL) was a shock. So, we resolved to move to the Peak District and return to fell running. I outlined this in a post about pensioners returning to fitness. The dream was to run the Kinder Downfall race route once more before my demise. That was the first fell race I won, in 1981. Since moving here, we have not attempted it. Last year Ann had a knee problem and I was out of form after each of 4 Covid shots. However, this year, we have run quite well, though slow. We have tackled some longer runs, about 8 miles, often with 1000′ of climbing. We were ready so all that was needed was a windless, warm day.

We easily breasted the plateau and headed across to the downfall, the waterfall. It was not as I recalled, less boulders and less wild. At the downfall, wonder of wonders, we were the only people there. We celebrated with more water and jelly babies. Onwards along the western edge, we passed weirdly shaped gritstone boulders. Then it was over Kinder Low, down past Edale Rocks and to Edale Cross. When I raced this route, I looked back here and relaxed, nobody was on my heels. A full 41 years later, we jogged downhill with ever weakening legs. A right turn took us into flowering heather, the wonder of these hills. We had run 9 miles and climbed 1400′ on a very tough route. The distance meant little as the experience, of being alive and well, far surpassed all other considerations. 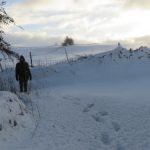 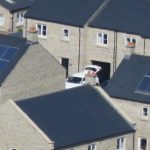