The Thirteenth Moon At Mudeford Quay

This is an unusual year, with the thirteenth moon at Mudeford Quay. Because the lunar month is shorter than the calendar month, this happens every few years. The thirteenth moon can be seen on the night of the 22nd December, the day after the shortest day. If it is a clear night, observe the moon from Mudeford Quay as noted in my previous post Heavenly Links Over Mudeford Quay.

What Did The Moon Signify?

Stonehenge appears to be orientated towards the rise of the moon. As it rose, Zuri’s people must have been astounded at how its size is accentuated and it has an eerie orange colour. This does not seem to occur when it sets, which is often during daylight. I have not seen the moon rise at Stonehenge but imagine it will be somewhat spoiled as it fights with vehicle lights on the A303. It still begs the question; what did the moon signify to Zuri and her people in 2200 BC?

The moon, unlike the sun, is never warmer or cooler; it just appears. The point at which it rises in the east changes, as does the sun. It is further left in winter, further right in summer. Was it the point at which it rises that mattered? That would indicate a time of year even though the sun does this more efficiently. Did they need to plant seed under a full moon? Perhaps it was a combination, the sun and moon in some form of conjunction. It might have been sheer superstition, of course. The moon shadows the sun and might have been seen as a bad sign, something that they tried to control using rituals. These Neolithic people dominated this coast.

The moon means little to us today, even at Mudeford Quay. Few of us walk in the dark, assuming we can move away from street lights, just to see the moon. Those gardeners, perhaps advocates of permaculture, who use the moon to set their planting and harvesting, will know the moon. They argue that it is the moon’s gravitational pull that helps plants thrive although there seems very little science in it. Those of us living on the coast have an advantage, of course. We can walk and see the moon over the sea, with a dark background, as my photo of the Isle of Wight shows. To us, this thirteenth moon will not be unlucky or surrounded by mystery, just another beautiful orb in the night sky. 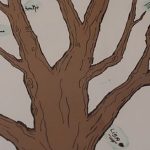 Pagan Lineage From the NeolithicPagan Belief 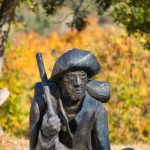 What is a Pilgrimage?Pagan Belief