The Naked Hiker On Big Moor

Curbar Edge looked razor sharp in the morning light though the wind was stronger than forecast. We ran past the climbers practice boulder, covered in chalk, and up through birch forest. The path meandered and then climbed, a thousand tree roots snagging the ground. We burst out into the light, midway between Curbar Edge and Froggatt Edge. The path, abraded by legions of walkers, was pure sand and the threat of falling receded. We pulled off right into the Neolithic stone circle. I counted 14 stones and made my abeyance to the builders 5,000 years before. After that, we continued past the Grouse Inn and turned up to White Edge. The field sequestered a huge bull and his harem. A cuckoo repeatedly called. However, the naked hiker on Big Moor was beyond the horizon.

White Edge look benign, the peat dry and the boulders evident. In January, it had been more like the Russian Steppes, frozen and snow clasped. We ran the three miles back to our camper van, pleased not to have tripped. Muesli, milk, plum toast and Comte put back some calories. We walked back up to Big Moor, determined to find the ancient features. However, a pile of gritstone boulders simply would not look like a hut base. The field boundaries defied us beneath their mantle of moor grass and heather. We crossed on tenuous paths, jumped the river and climbed. As a result, we then stood in the second stone circle, bigger than the first. Beyond was a cairn circle, which I later found was rebuilt a decade ago. However, we were alone with the Neolithic, under huge skies.

The naked hiker on Big Moor

To ease our return, we walked north to follow the contour around south. Coming towards us was a naked walker, gently swinging in rhythmic gait. He was not coated in woad. His modern boots and socks mocked the mass of skin glistening in the sun. We were on a crossing path so did not speak. Consequently, he headed south to where cars were parked. We, not realising the ancients were guiding us, eyed a small valley and set a route back over the river. Ann, with a very wet foot, lead the way back into the peaty heart of Big Moor.

The path, a mere parting of the bracken, lead us to what I can only call a fairy dell. A stream poured over the edge, into a deep recess. A few metres beyond was an amazing stoup, an upright, inscribed stone, used by those leading packhorses over the moor in the 1700’s. When you looked at ‘Sheffield’ carved in the stone, that route was behind you. Our route, on the other side, was ‘Tideswell’. We followed the faint packhorse trail, the only way goods could be carried over these wild places. Back home, I Googled naked walkers in the Peak District and they seem to have a following. Besides that, the Metro reported that some were naked runners flopping about all over the place. I doubt the shamans had to put up with all these goings on? 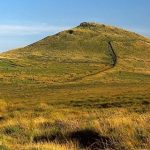 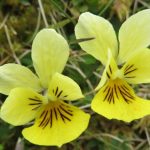