I visited Stonehenge recently with friends. It was chill, misty and raining. Because it was torrential rain, we used the shuttle bus up to the stones and then followed the paths in a circular perambulation around the circle. The A303 was as noisy as usual with cars and trucks creating a trail of mist from the water on the road. The sky was like a great wet blanket. It was Stonehenge without the spirituality of the sun and moon. Consequently, it begs the question, is Stonehenge misinterpreted?

We were soon very wet and cold. Strangely, this experience opened up a new perspective on Stonehenge; that perhaps this weather was what they sought; that the sun and moon were not their only focus. Consequently, it is easy to be mislead in poor weather. Even in the Stonehenge shop, every photograph seems to include the sun or moon peeking between the stones. Further, the audio-visual display, where you ‘walk’ between the stones, is all blue sky, puffy white clouds and celestial worship. It is not dense cloud and rain.

The cloud had a dramatic impact. Firstly, the circle felt isolated, cast adrift on the high downs, way above all the encircling land. Secondly, the avenue, the tribal path to Stonehenge, was really emphasized. It dropped away to the famous elbow and eased right into its little valley and out of sight. The line of the path reappeared across the chalk downs, much further away than it usually appears. It struck me that this isolation, this high place in the cloud, might be what the circle is really all about. Stonehenge, without the sun and moon, has a new and eerie quality.

Having been to Stonehenge a number of times, I have mostly experienced poor weather. Consequently, the sun or moon has not put in an appearance. During these visits, I often wondered what Zuri’s Neolithic people would have done in 2002 BC when the weather was bad. It seems incomprehensible to have abandoned the planned ceremonies because the sun or moon could not be seen. Now, I am more inclined to think that they were prepared for all weathers. Perhaps they had rain or mist gods. This would have offered ceremonies that celebrated the isolation of Stonehenge rather than alignments to sun or moon. We have to ask ourselves whether Stonehenge is misinterpreted? 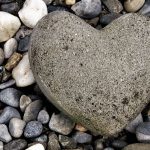 What is Love To Our Ancestors in Prehistory?Neolithic 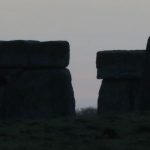