The Channel 4 programme Surviving the Stone Age really appealed to me. The reality was less so. The first, of three, was on Saturday 7th November 2020. The clothing of the eight participants suggested that Ralph Lauren had styled the ‘buckskins’. They appeared more like Davy Crockett. Scruffy bearskins were obviously not on. All eight were experts, variously, in ancient technology, botany, and stone and wood working skills. Their first task was to catch fish but not even a tiddler was extracted from the water. Consequently, the decision was taken to move to the near freezing mountains. They used so much energy and needed their reserve dried food store. For certain, you wouldn’t bet a penny on humans surviving the Stone Age based on this first episode.

Yes, I know how difficult surviving is and no, I couldn’t do much better. However, where the programme fell down was on the brief, the logic behind the programme. Firstly, evidence suggests that humans moved out of the Basque Ice Age refuge in 10,000 BC. Some headed towards ‘Britain’. They advanced at one kilometre a year. It’s about 2,000 kilometres and it takes 2,000 years. At no time would the tribes have moved out of their comfort zone. Their children, as young as 7 years, knew every plant and animal in their immediate environment. Crucially, they did not know every plant in unfamiliar environments. As game depleted, so the tribe moved to areas of more game. The hunters would always know the land for some distance. They would never speculate, drift off seeking new lands by climbing over mountains, as they did on this programme.

The eight then built a boat, a coracle. In truth, I think somebody else built the boat because we only saw it more or less finished. Then they set off on the river. Some river! It was a trickle and full of shallows. They needed a real, navigable river, like our Avon or Stour. After cruising downriver for what seemed like ten metres, they got off and scaled the mountains. The reality, of course, is that the mountains are up the river, the sea is down. The eight in the programme were all fit and well. Stone Age tribes included old people, nursing mothers and toddlers and did not scale mountains. The eight found a nice camping spot, settled in and then sought water. Stone Age tribes would have found the water first and then settled down!

However, up in the mountains, one of the men suddenly flashed a bag of ground sweet chestnuts. Where did they come from? The trees all looked like pines. How had he ground them? The grinding querns of the day were heavy chunks of sandstone. The group then dug up roots, weedy things with hardly a calorie in sight. In truth, the best starchy roots are beneath water reeds and they, of course, were back at the river. Well, not that mud free river. One of the eight was a botanist. Her role was highlighted, but why? Nobody in the Stone Age tribe was a botanist. Imagine the tribe that lived in Dorset, on a chalk environment. Transport them to the peaty Pennines and they would starve to death. They only knew the plants that grew where they lived; it was all they needed to know.

The greatest benefit to humans is warm and dry overnight accommodation. The group fell apart after two nights as the mountain temperature dropped below zero. Their shelters were pathetic, using branches and large leaves. They built shelters separately and ignored the well known Stone Age rule; sleep together. They needed a reed thatched hut, with a fireplace in the centre, to keep warm. Their wilderness had no reeds so why were they not better prepared?

The fundamental error was, of course, the Bulgarian wilderness they chose. It’s a wilderness because it lacks fertile soil and so was avoided by humans, in the Stone Age, as now. The Stone Age people were not stupid. People avoided the wilderness because places like Britain were far more hospitable. It offered game, water, silt soils and plants, and stone such as flint. They are here in abundance and so we are the very opposite of a wilderness (Scotland might be an exception!) In truth, the programme was exceptional in showing what not to do. Consequently, if you want to play at humans surviving the Stone Age, then you need to find the right location. That location needed to be here, in Dorset. That’s why I wrote my last book about this Stone Age paradise called Avonlands. 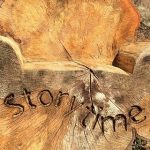 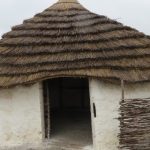