DNA Missing From The British Past

It was a programme on skin and why the Navajo have skin problems that put me onto this theme. It appears that when the Navajo Indian people were forced on the Long March in 1864, many died. The survivors had a disproportionately high incidence of skin disease and that has remained in the surviving population. This reminded me of how aspects of our past might severely distort our own human record. The DNA missing from the British past is due to a funeral practice. Those of us today that choose cremation follow the same pattern; one that destroys our DNA.

The first hunter gatherers in Britain lived hand to mouth. When somebody died, they had far too much to do than spend time digging graves or building funeral pyres. They simply did what their forebears did; exposed the body to animals and birds. That left them free to forage for food. Once the skeleton was cleaned off, they salvaged a few bones. These could accompany them, as they still followed a nomadic life. The bones kept them in touch with their ancestors.

The hunter gatherers settled in a single location when they started to grow crops in 4000 BC. They also appear to have refined their funeral practice. The bodies were exposed on towers, lifted away from the animals and displayed purely for the birds. The bones were collected and put into chambers. The birds, the sunlight and oxygen, all destroy DNA. It is the opposite of bodies frozen into the permafrost or buried in soil. These latter bodies can maintain some DNA for perhaps a few thousand years.

DNA missing from the British past

My pagan ancestor Zuri in 2200 BC knew only the birds when it came to death. When she experienced a burial in soil, of one of the Beaker People, it profoundly shocked her. So, when we dig up these buried bodies they reflect a different culture, people who have moved in from Europe. What we might call the true Britons, the people here from the Ice Age, gave their DNA to the birds. Consequently, they flew off and took our entire identity with them, never to be found. 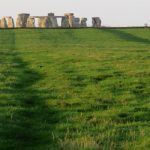