The conditions were right on the 25th September 2018; a full moon and a clear sky. Ann and I witnessed the heavenly orbs over Mudeford Quay. In a post last August called heavenly cycles I described how the sun and moon could be seen from the quay. These are the ‘twin sisters’ in my forthcoming book called ‘My Pagan Ancestor Zuri’.

Ann and I walked down to the quay after 7pm. The sun set in the west, over the harbour, in a myriad of colours. This lasted perhaps 15 minutes and even at the end, a gorgeous deep red lay above the Purbecks. In complete contrast, the east was dark and sullen. We gradually walked around the quay so that we could look over the bay to the Isle of Wight.

The mere edge of an orange ball heaved itself above the Isle. It was almost unreal, as if it were the sun itself, asleep now, mirroring its daytime role. It climbed higher and higher, until its trail trickled, shimmering across the water to where we stood in the dark.

What did Zuri make of this in 2200 BC? Why does it only happen at full moon? Where does the moon go otherwise? I imagine her people had a mythical answer, but unknown to us. The orbs ride the sky, a mere 20 minutes or so apart. Something magic was afoot, something only her Gods could understand. Zuri watched this as a ritual in her tribes henge, which lay beneath where Christchurch Priory now stands. It was the ideal elevated observation platform, at a time when the quay did not exist.

Heavenly orbs over Mudeford Quay reminds us of its ideal location; it is one of the few places left to observe this phenomenon. There are no trees around the quay and the view west and east is across extensive water; there are low horizons in both directions. The sun and moon appear in their full glory. I often wonder if sailors out on the sea, with low water bound horizons, see the sun fall and the moon rise seemlessly, with no interval. Is there somebody out there who knows whether this really occurs? 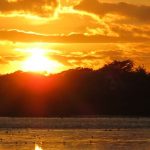 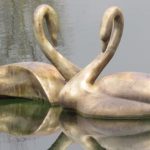