The Quality of the Build In Christchurch

I have moved house sixteen times in my life. Is that sufficient to give me the right to talk about building quality? And what, precisely, is building quality? Why did I wake up one morning with this subject on my mind? Perhaps it’s all these aged bungalows and houses around Friars Cliff being rebuilt, suddenly losing their roof and walls; a sympathy for the 1930’s. Let’s return to the quality of the build.

As a child, moving from private rental to a council house in the mid 1950’s was a revelation. It was roomy, well built, with an indoor toilet, a shed and a garden. The real quality was the estate community. We were relatively poor but will loads of kids of the same age. Lots of play and fun. The house, incidentally, was awful. It was so cold. When the fire heated the backboiler to warm the bathwater it deprived the house of heat. Because of this we washed at the sink and a bath was rare. My memories of the house were mostly of frost inside the windows and chilblains on my feet.

Once married, I moved into a cemetery lodge circa 1855, with leaded windows and a cellar. As a result, it too was freezing. Consequently, we bought our first house in 1971, an Ashley semi. Ashley was a Shropshire housebuilding firm on a large scale. We thought we had made it! It was comfort, of sorts, simply because it was warm. There were no radiators and an oil burner wafted out warm air. Because the stairs was open plan, the heat was tropical on the landing. The quality of the build was poor with all internal walls made of plasterboard.

We soon moved to new cities, firstly two rentals and then a detached house on a modern estate. This was poorly built too and still with warm air heating. Nine years later, up North, another two rentals before moving to a new bungalow built by a local builder in 1984. That was the revelation, the local builder. Certainly, he had a passion for building and sought the best materials together with masses of insulation and Swedish wood triple glazed windows. No condensation, no noise and hardly any maintenance; his reputation mattered.

We moved on to a modern detached house in Cardiff, built by a national housebuilder; plasterboard internal walls and noisy; problems with electrics. Two years later, an oldish bungalow in Croydon was followed by our present bungalow in Friars Cliff. This is a 1980’s build which we prefer to call ‘single level living’. It is well built by a small local builder. Consequently, quality means local, small, and passionate about building. The big housebuilders are feted by government yet only interested in themselves, their profit and their land bank. Will politicians ever understand the need to look after the small firms?

Thatched HutZuri, in 2200 BC, spends a chapter in my book building a hut. Quality, even then was paramount, and a thatched roof was it! They prospered on this coast, those early people. 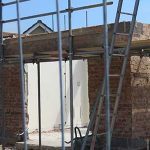 Another One bites The Dust In Friars Cliff!Housing 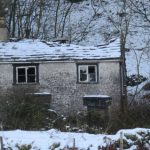