Derelict Cottage In The Peak

The derelict cottage in the Peak reads rather like an old poem. Indeed, it even sounds like an old poem as the moping owl calls in the dead of night. The photograph shows the building exactly as seen from our barn. It is entirely derelict, the roof timbers having collapsed in the past few years. The cottage hunkers back into the dank limestone and peers over those of us still in the living world. However, the odd thing about our village, at least in its oldest part, is that it faces north and into the cold. At a thousand feet, logic suggests that it should have been placed looking south into the sun. We had 50 days after the winter solstice before the sun cleared the hill.

It is fascinating to walk along the front of the cottage. It is being slowly strangled by unrestrained garden shrubs. On the right side is a steep garden, accessed by small stone steps, all grown over. The toilet, the privy or netty, sits over the footpath. The pedestrian paths define this property and reflect a culture that walked everywhere. The village is built along Main Street, fronted by properties, many of them terraced. However, there is a second row of houses behind these. To reach these houses, paths leave Main Street at right angles; they are called ginnels. Some are wide enough to take one vehicle, but most are not. The ginnel called Smithy Lane heads directly up to the derelict cottage. At the top, it is narrow, steep and grassy. Descending is really dangerous in icy weather.

Derelict cottage in the Peak

I suspect that the cottage has not been sold because vehicle access is not possible. I also imagine it to be a damp cottage; many properties cut into a rear slope have this problem. However, the real issue is that the cottage is perpetually in the shade, that it never sees the sun. However, those negatives put aside, the tenant, in the past could, within minutes, walk down to the metropolis on Main Street. Sometimes, in the cold, they must have done this on their backside. They passed the smithy on the way down and then there was a butcher, a general shop and, later, a post office. At both ends of Main Street sat a pub. Of all these only one pub still remains.

I cannot imagine any utilities reaching this cottage. With ample wood and candles, the tenant, might be cosy. But, no water? Fortunately, the footpath in front of the cottage takes a scenic and direct line up to the High Well. This well, it appears, served the entire village. I can imagine the daily walk, dipping the container, the steep descent back, often very slippery. They only needed drinking water and perhaps the occasional flannel wash. A gallon a day, at most, would suffice as there was no bathroom and the privy was water free. A hundred years ago, the cottage might have seemed a good living. Only we can appreciate how easier life is now, but that it might have cost us the world! 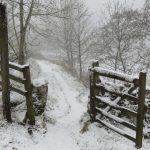 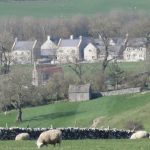