Another One bites The Dust In Friars Cliff!

Is it odd to draw a parallel between housing in 2200BC and today? Perhaps, but let’s give it a try. Zuri’s people may well have housed everybody, which is more than we can achieve in our advanced society. Their huts were single storey, looked similar and had open access between each property. Doubtless, that created a sense of community, in part because everybody was at the same social level. Buildings were not demolished and neither did they know pop music or what we mean by, another one bites the dust!

Jump to today and Zuri would no doubt be comfortable with the bungalow, a style of building that should be cherished as one of the icons of Christchurch. I might argue that the bungalow retains the DNA of the hut, and so has a long history, perhaps going back 8,000 years. Look at the swathes of bungalows that remain and you can sense the community they create. They are often placed on open plan gardens and that suggests ready access between properties, rather similar to Zuri’s experience. Okay, it’s the old that principally dwell in the bungalows. This is because they are the community that need smallish properties. Above all, they want no stairs and one to three bedrooms, with easily managed gardens. That is why Ann and I live in one, because it’s a sociable style of living.

The problem is that people now say that finding a bungalow is ever more difficult, and it’s money that sounds the death knell. The bungalow possesses that damned investment potential; an unused loft is now valuable space, so off comes the roof and up it goes another level to create four bedrooms overall and more. One builder near Stanpit was actually building the new roof over the old one, which presumably was removed sometime afterwards. The bungalow then becomes a house, and terms like chalet bungalow are a lie. The problem is that we are not short of houses, more especially the larger so called executive house. It’s the smaller property, like the bungalow, that now needs protection.

On some occasions, the ‘improved’ bungalow joins those intimidating big houses, all smoked glass and is then gated, shut off from the street and other houses. Even more, the front garden is re-imagined as a mini car park and disappears under a mass of motors. The sense of community is lost, whether imagined or not. If the bungalow itself is a resource for a specific market, should the planners refuse all applications to turn them into houses? Maybe the planners should ensure new bungalows are built to replace those morphed into houses, so the stock is maintained? Otherwise, the bungalow will progressively disappear, as will the pensioner residents. The council, of course, receives a higher council tax for houses so perhaps they are content to let the market rule. Markets, as we know, are pernicious.

If Zuri was here, I have no doubt she would demand more single level huts, factory produced, quick and therefore cheap to erect, and low cost to heat and maintain. Because Zuri is all about utility, the days when logic built huts is gone; huts are now all about financial worth rather than purpose. 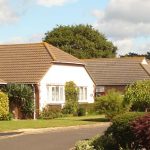 The Quality of the Build In ChristchurchHousing