The Best Place To Retire On The Dorset Coast

I have had discussions with many people about the best place to retire on the Dorset coast. Various reasons inform this decision, not least the cost of property. The east of the county is expensive but less so as you travel further west. Why do prices vary so much? Perhaps this relates to the time it takes to get to hospital if you have a serious illness.

Every time Ann and I head west in Dorset, ambulances speed past in emergency mode. Rightly or wrongly, I visualise people in trauma heading for hospitals that are ever further away. When last in Lyme Regis, it struck me that hospital, a major hospital, was a long way off. I put the question to Google and it suggested that it was 21 minutes – to Bridport Community Hospital. This is little bigger than Highcliffe Medical Centre! Google understood the golden hour, within which you must receive treatment if suffering serious illness. It did not suggest which major hospital would be used from Lyme Regis. For certain, it would be much longer than we in the east can reach Bournemouth Hospital.

Those that argue for retirement in places like Lyme Regis talk of its leisure opportunities, principally walking or cycling. That does not hold water. Every route out of that town is uphill, steeply uphill. Worse, the access to the coast heading east, which has slumped, is closed. Okay, Christchurch may not have that dramatic coast, but what it has is relatively flat, well paved and with access for the disabled.

Is it the distance from London that influences property prices? Christchurch is two hours from London by train. Lyme Regis requires a drive to Axminster and then three hours by train. However, there are other places to retire in this wonderful area.

It seems weird to ask ‘My Pagan Ancestor Zuri‘ what she thinks but it is strangely valid. The traders bringing red sandstone and Kimmeridge shale from the Jurassic coast told her that it was a remote, wild place; that the rocks in the sea and the cliffs made it dangerous to go ashore. Unlike Christchurch, it was not an area where people could thrive, in 2200 BC at least. A sheltered harbour, navigable rivers and water meadows were essential for a good life. That’s why Zuri’s tribe built Stonehenge on the River Avon.

The Best Place to Retire on the Dorset Coast

Zuri and I rest our case. Then as now, East is best. 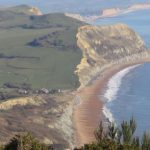 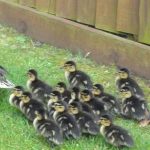 Why Do Ducks Nest So Far From Water?Birds, Paleo food, pensioners