The post arrived today, reminding me that bulb catalogue fever is a seasonal ailment. Impulse buying is not my weakness, except when it comes to plants. The geranium speaks of summer sun. I look at the gleaming catalogue photos but it’s the dullness of winter that overwhelms me. The relief, the antidepressant as it were, is colour and vitality. What better than bulbs, pent up in the soil and waiting to explode into voluptuous colour. But, this year I have to temper my yearning.

The damn tulip fire caused my tulips to wilt and fade; they looked so sad for themselves. It’s a fungus promoted by mild, wet weather. The winter before last was their nemesis. Since then, every tulip that appears, no matter what state, must be ruthlessly removed and sent off for commercial composting. I have to wait at least three years for the fungus to clear. The trouble is, it’s quite difficult to replace tulips. Daffodils are rarely an alternative. They don’t have the range of colours to associate with many bedding plants. Stands of daffodils on their own are fine and uplifting. The daffs also have to be left for a long time to die back during which they look scruffy.

Whether my bulb catalogue fever is a seasonal ailment is not something I can discuss with Zuri. She is a Neolithic horticultural expert and yet her knowledge, vast and without an iota of botanical science, is all about native plants. Tulips, indeed, any plant not used for food or medicine, is alien to her. In fact, her virtuous approach is troubling me. I am feeling less and less comfortable with the non native plants, the majority in my garden. The exotic palms, bananas, bamboo, phormiums and passion flowers now trouble me. The tulip fire would not have been a problem if I had used native plants. It might not be as serious as Japanese knotweed. That plant, which can penetrate concrete, can also prevent you obtaining a mortage if it exists in the garden. We bring in foreign species and tinker with nature at our peril! 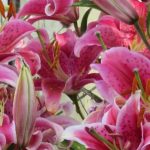 Growing Lilies In The English GardenGardening