Mountain Pansies In The Peak District

We drifted down Main Street, past the byre and along the lane called The Gates. Two people approached, looked lost and so we chatted. However, their route was complex so we gave up our walk and guided them. It must have seemed odd that I could suggest that they looked over a drystone wall to see some orchids. She, a french woman, and he, a Channel Islander, had never seen orchids before. We passed through squeeze stiles, dropped into High Dale and climbed out again. Past a dewpond and on to Priestcliffe Lees, the nature reserve. However, finding mountain pansies in the Peak District was a long way from my mind.

The reserve is really a chunk of hill historically devastated by lead mining and quarrying. Cutting across our path was a lead rake, a deep scar lined by grassy tumps. These were the mounds of waste rock, now grassed over. However, on the top of some mounds was a delicate yellow, easily missed. Finding flowers, like finding lichens, needs certain skills. Once spotted, and as if you were a Neolithic forager, you never forget. I dropped to my knees and gazed in joy. Each flower, side on, resembled a tiny ballet dancer. There were almost no leaves, just this little wind shaken pansy.

Mountain pansies in the Peak District

We said our farewells to our travelers, and they descended to the Monsal Trail. I went back on my knees to photograph the little gems. However, I now know the subtle yellow of this pansy. Consequently, I have spotted the pansies elsewhere, even just above our village. I doubt anybody else sees them. They are always on tump tops, way off the path yet always exposing their little faces. The bees will know them, the winds will shake them and most humans will pass by, unaware. 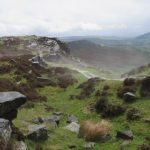 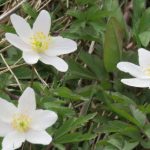 The British Windflower Or AnemoneEnvironment, Gardening