Cremation And The Waste Metal On Your Body

The Amesbury Archer started something back in 2200 BC when he became the first person in Britain to be interred with gold and copper items. The photo shows his grave, as set out in Salisbury Museum. His Neolithic belief was probably similar to that of the Egyptians. Consequently, you need wealth, tools and such things to enable you to manage in the next life. This later spawned extravagant boat and chariot burials in the UK. As Christianity dominated, the church deplored such ostentatious habits. The soul might move on but it appears not to have a luggage allowance. Cremation and the waste metal on your body is no less of an issue.

The emotional and spiritual symbol of the gold band denoting marriage and partnership changed all this. At some stage, wedding rings began to be left on fingers in the coffin. No one seems sure when this started but it probably began when wealth increased in the Victorian era. Likewise, other rings and jewelry were left on the body. Probably, this was because more people demanded the viewing of the body before the funeral. Added to that superficial glitter we now have the hidden medical implant. This is often made of rare and expensive metals, perhaps worth more than the jewelry. It now begs the question; how much is the scrap metal value of your body?

The scrap metal value went up because we introduced metal hip replacement implants. We then added more as a consequence of our increasing longevity. Even more time is spent falling over and headbutting the skirting boards, consequently, metal bone splints and all those screws now outweigh the hips. Body piercing has added tongue studs and navel rings, not to mention those bits dangling in the erogenous zones. A little extra bite is often added by gold molars. As most of us are cremated, this metal remains in the ashes, but do they tell you what they do with it?
About 56% of UK crematoria, often those who have adopted the Charter for the Bereaved, send the metal residue for recycling. Bournemouth do this through a scheme organised by the Institute for Cemetery & Crematorium Management (ICCM).

Private sector crematoria have their own less transparent scheme, and so overall, about 80% of crematoria do recycle. What happens at those crematoria who do not participate in this charitable process? Those are the ones who say nothing about metal residue on their websites? Worse, do any of these crematoria still bury the metal in the crem grounds, which was usual until a few years ago? If so, this is a potential pollution hazard.

When it comes out of the cremator the metal is often unrecognisable as such. This includes the gold and silver, all of which melt when the temperature reaches 1100 C. But alloys, like hip implants and plates, retain their shape and uniformity. There are few firms capable of smelting this residue. This is because it has to be taken to a very high temperature and the various metals skimmed off. The ingots are then sold back into the metal market. After collecting the waste metal from member crematoria, the contracted firm pay an agreed price per kilo to the ICCM. This is distributed to charities nominated by the participating crematoria. Over £5 million has been donated to date.

Cremation and the waste metal on your body

Be a charitable body and ask your local crematorium whether your scrap metal will be recycled and benefit society. After all, you can’t take it with you. 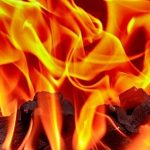 The Cremation Society And A Polluted WorldCremation, Environment, natural burial