The Grey Ditch At Bradwell

Enigma abounds in this amazing country of ours. It often arises as something done by people in the past, and yet we don’t know why or when. Stonehenge might be the greatest enigma but what about the Grey Ditch at Bradwell? This earthwork, what we might truly call a dyke, drops down from Rebellion Knoll, crosses the old Roman Road called Batham Gate, and then heads west. It curves left beyond a rocky knoll called Mich Low and then ends. It is considered an Anglo Saxon feature and is therefore dated 400 AD to 1065. That is an indeterminate period and covers the so called Dark Ages. They were less dark and rather more about a lack of scribes and paper. It might not have been written about but a lot sure happened.

I know the ditch really well, running or walking through it at least three times a week. There are four sections, over about 1.7 kilometres. It was never a complete line and always had gaps. If you think that odd, consider that Offa’s Dyke, built over the same period, was similar. A series of embankments but never comparable to Hadrian’s Wall. Neither was it permanently manned, more a feature to shout out ‘you are now entering our country’. It might also have been a place to meet in the event of attack. The Grey Ditch was built over ploughed soils. This suggests that people were farming and then felt threatened or were instructed to build it. They dug a ditch on the north side and embanked the soil on the south.

I have been reading a book of this title by Marc Morris and it is fascinating. I read it because I previously read about the Romans in Derbyshire and nearby Navio Fort. That ended around 400 AD and I wanted to know more about the subsequent Anglo Saxon period. I didn’t think that it would mention little Bradwell and I was right. However, it did offer one teasing detail which enables me to posit a theory about the Grey Ditch. In 920, someone was ordered to create a burh at Bakewell by King Edward of Wessex and Mercia. The burh, an embanked settlement, marked the furthest point North after Edward advanced up the River Derwent. The Vikings of York retreated to the east of the Pennines. The burh’s further south had helped to counter the Viking incursions.

The Grey Ditch at Bradwell

The Anglo-Saxons were doing well at the time, holding the west as far north as Manchester. The wild Pennines shuts off the west and north. The Vikings are over to the east, based at York. They could easily creep over the area we call Sheffield and into the Hope Valley and then approach Bakewell from the west. Bradwell is key to that rearward approach. Consequently, they build four dykes, in sequence, between high ground on the east (Rebellion Knoll) and west (Mich Low). Those dykes also control the two roads from the Hope Valley, the Roman Batham Gate to Buxton and Brough Lane. Where Brough Lane went then is less certain but it is in the Bakewell direction. The Grey Ditch is an amazing feature yet almost ignored today. 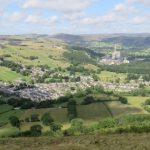