Lundy, what a joy it was to visit in May 2019. Isolation, romance, mystery and, sadly, even cruelty, are words that apply to the island. It makes me realise how much Britain has to offer. The island, at first sight, looks flat and even boring. In reality it proves to be full of secret places and glorious scenery. The puffins on remote Lundy Island are the icon to survival in the face of human exploitation.

We sailed from Bideford in Devon, a pleasure in itself. A river journey of creeks, mud lathered hulks and past the last local boatyard. This, at Appledore, had closed only a few months previously. Out into the Atlantic, seals, a dolphin and unrecognised seabirds before the island appears. Shangri-La could come to mind but Atlantic gales and absence of trees on the skyline shatter that image. The jetty was in a ring of rock and the steep track up to the village looked a challenge. Because of the hill, the less mobile opted for a landrover. At 120 metres above sea level there was a church, a castle, a pub, a farm and a shop. In all, 23 self-catering Landmark Trust properties are available, some a distance from the village.

Our party for four had a two night rental in Government House. This was not ready (the cleaners were on the ferry with us!) so we walked around the south of the island. A lofty lookout to thousands of seabirds on the water. Our property was duly ready, 30 metres from the pub, a sturdy, long, single story building in granite. It was built for the island manager, a maze of rooms furnished in 1800’s style. The windows all looked east to the Devon coast. Tucked down the slope were some stunted trees, festooned with lichen, hiding from the wind. All paths wound through rank grass and wildflowers. Modernity, violence, abuse, wars, all lay across the sea; history was to prove otherwise!

The puffin search began next day with a brisk walk to the North End of the island. It was two miles and we found a mass of white granite and heather. It was a facsimile of Dartmoor. No chalk or flint here. At Gannet Rock, no gannets but eight seals. Their lolling and ‘singing’ expressing safety from predators. We followed the coast westwards with amazing views. Sea foam created massive swirls out into the ocean. We found guillemots, in their thousands and, finally, the puffins on remote Lundy Island. Their numbers are increasing since rats were eradicated.

I did not anticipate Neolithic people living on the island but I was wrong. A few flint artifacts have been found but little real archaeology has been carried out. The island was many times bigger in the past and yet still an island. How did they get there, and why? Zuri would enjoy ready access to lots of birds and eggs but her exploitation would only have been the start.

Reading up on the history of the island, the fishermen of Ilfracombe and Clovelly were the violence that came by boat. Each year, they took thousands of eggs and over 20,000 bird wings to adorn ladies hats. Worse, puffin feathers made money, 24 dead birds to the pound of feathers. It was uncomfortable reading.

The island has no surfaced roads for its couple of landrovers and tractors. Silence rules except for the occasional helicopter. Sheep, soay sheep, cattle, deer and goats roam in the oceanic mist. Horses and pigs are in fields. Only the history of human exploitation spoils the image, and that is now over. Well done to the National Trust, the owners, and the Landmark Trust, who manage the island. They have to juggle this delicate balance between tourism and wildlife. The tides dictated that we sailed back to Ilfracombe, a dramatic coast, and Damien Hurst’s magnificent Verity dominated the harbour. What a statement she makes when compared to that twee mermaid at the approach to Copenhagen harbour. 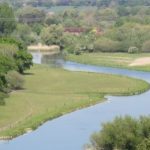 When Will The UK Run Out Of Water?Environment 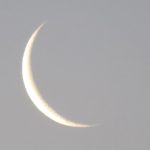 The Waning Moon In The Night SkyNeolithic, Pagan Belief, The moon